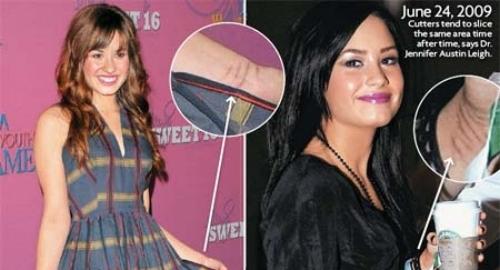 Rumors are swirling that Disney star Demi Lovato is cutting herself. Numerous pictures of Demi with five slashes on her wrist have surfaced.

“Demi has been really stressed out about her new show, Sonny with a Chance,” a source close to Demi said. “She’s not getting enough downtime because there is so much work involved, and she’s always being pulled in different directions.”

However, Demi Lovato’s representative released a statement saying that she is not a cutter, and that indentations on her wrists were from excessively tight plastic bracelets. You know the type of plastic bracelets that only leave slash type marks on the inside of the wrist.

For those that do not know cutting is a serious problem. It is when over-privileged and undersexed white girls, who don’t know what real problems are, scratch and cut themselves to release what little stress their pampered lives cause them. It will often lead to more serious self destructive behavior like eating feces, or even worse dating Mexicans.

Hopefully someone close to Demi will check her teeth, and not believe the obvious excuse of “I was eating a brownie” before it is too late. Of course I have no idea what signs to look for to see if she is eating feces.