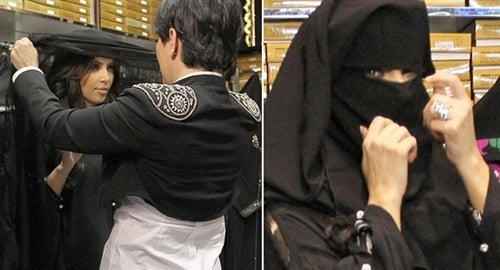 Afters years of prostituting her disgusting feminine curves for fame and fortune, Kim Kardashian has finally wised up and put on a burka. As you can see in the photo above Kim Kardashian has opted for the highly fashionable 2012 black (there is a shock) model.

Obviously that half breed husband of Kim’s has been a good influence, but I am afraid this is a case of too little too late. Kim Kardashian should know that nothing short of taking her own life with a dull spoon will make up for her being caught on tape getting banged by a degenerate like “Ray J”.

I’m afraid putting Kim Kardashian in a burka is like polishing the brass on the Titanic. When she meets the iceberg of Islamic justice, that bitch is still going down. Allahu Akbar!