Joel Madden and Nicole Richie Cooked an Elephant for Their Wedding 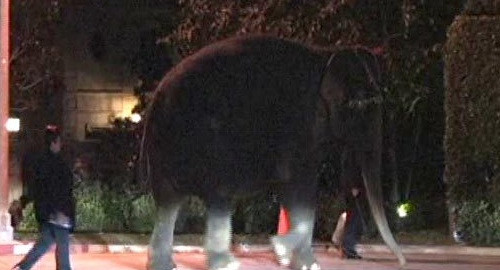 As this picture clearly shows, a prodigal daughter and human tattoo mannequin got married on Saturday night and decided to celebrate the affair by eating the world’s largest land mammal.

That’s the only possible explanation for why the couple would have gone through the trouble and expense of importing an elephant to a wedding. American appetites are such that it is not uncommon for a family of 5 to devour an entire hippopotamus while idly ogling celebrity dance contests.

While early reports convey that the elephant was tender and delicious, several attendees claimed that Nicole didn’t eat the elephant itself, but was seen voraciously chomping on its shadow.

While both the bride and groom exhibit the worst about the United States, it’s nice to see a newlywed couple following in the Middle Eastern tradition of roasting an elephant to celebrate love.